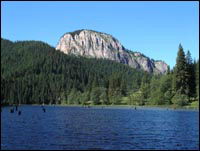 The Gyilkos lake presumably started up as a natural valley-blockade on the summer of 1837. It's name has changed during the times. It's original name vas Red lake, from the Red Creek, which flows into it. The current name Gyilkos lake (murderous) was introduced by Orbán Balázs. The local belief correlates the names Red and Gyilkos with the legend saying, that the falling hilltop would have buried the herd of sheep and it's shepherd under itself, and the blood filtering through the earth has changed the colour of the water into red for a long time. 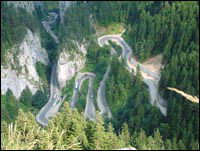 The Békás narrows is located in the upper valley of the Békás creek, in the direct continuation of the Gyilkos lake. It is the most well known, most popular and most beautiful defile of the Easter Carpathians. The average height of the neighbouring mountains is 1300 m and these are broken by the 2-300 m drop of the stonewalls of the Békás glen. The total length of the glen is 5 km. One of the most famous, and very rare plants of this area is edelweiss. 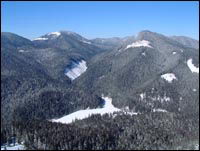 The Likas depression belongs to the rare vertical pit-caves, in the northern side of the Likas mountains, situated at an altitude of 1650 meters. It's total length is 51m and it has three separate parts. At the end of the 34 m vertical tunnel there is a three-meter thick ice plug. The western side of this plug is melted during the summers, and trough a tight gap it is possible to breach the lower cave, which is 17 m deep, and is bottomed by a "fake bottom" made up of debris. The temperature of the depression is constant +3 centigrade, and it is the most spectacular view at the beginning of the summer, when the walls are covered with a thin layer of ice and from the passages there are icicles and ice hangings. Because of the danger it is only possible to visit the caves using climbing equipment. 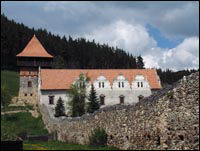 Lazarea
The noteworthy building of the village is the castle of the Lázár family, where Bethlen Gábor was raised (his mother being Lázár Fruzsina)Lázár István relative and one of the big supporters of Bethlen Gábor had built a renaissance castle in the place of the old manor house of the family. The castle was damaged several times later, burnt down once, was rebuilt in the XVIII century, but with time this building was perishing as well. It was restaurated and now one of the bastions functions as a museum.

Tusnad spa - Szent Anna-lake - Mohos muskeg
Tusnad spa is known by its springs of mineral water, the carbon dioxide exhalations (mofettas) the clear air and the beautiful landscape. The holiday resort is located between the Csomád and Somlyóko; the glen is situated at a 606 meters above sea level. The gem of Tusnád spais the twin craters situated on the top of Csomád, in which one can find the Szent Anna lake and the Mohos muskeg.
The Szent Anna-lake the only one of its kind, a crater lake, situated in the single undamaged volcanic crater in the Central Eastern European region. It is a rarity of nature, protected by law. It is located at an altitude of 950 m, it's water is clearer then the distillated water. It's circumference is 1737m its area is 95280 m2, it's 8.3 m deep on it's deepest point, and it's shape is almost a perfect circle.
The Mohos-muskeg is located in the twin crater of the Szent Anna lake, it´s diameter is 800 m, 10 meters deep, and has an area of 80 hectares. It's located on a height of 1050 meters above sea level. A thick layer of sphagnum covers the Mohos muskeg, which hosts' plants which were regular in the ice age, as well as herbs. The number of free water surfaces and tarns is decreasing. Interesting carnivorous plant of the area is drosera.

Szovata - Bear lake
Szovata is the most famous spa of Maros County and the whole Transylvanian area. The most visited part of the spa is the plage build besides the Bear lake. The lake's water is extremely rich in salt; it's temperature varying from layer to layer. In certain depths it can be as high as 50-70 centigrade. Swimming in the water is hard, because the high concentration of salt keeps the body afloat. The other popular spot is the Black lake, which got its name after it's black mud, rich in organic materials and chlore. There are several springs in the spa, their water is used for water therapy. Szovata is mainly wisited by people suffering from rheumathism and women´s diseases.

Praid- Parajd
Parajd gives place to one of the most famous salt mines in Transylvania, and also the most densely covered by springs in the whole area. It´s mines were exploited since the romans, it´s salty baths are popular in all seasons. One of the sights of the locality is the salt cliff above the village.

The name Korond equals hand made ceramics, of creation of tinder objects, weaving basketwork, woodcarving. Tipical vista is the permanent fair along the main road. Products made of ceramics, woodcarvings, straw and reed-mace object welcomes the visitors. The underground springs rich in salt and the calcareous deposits resulted in a layer of aragonite, used as building material.

Lupeni - Farkaslaka is the home village of Tamási Rron, whose relatives still live in the village. The house in which the writer was born is a 150 years old shingle roofed building functions as a museum, and it´s marked with a memorial tablet. The writer was buried in his home village as he wished, the grave is located on the edge of the village on the hills of the church.
In the year 1440 monks have arrived to Csiksomlyó. Their temple and smaller abbey was built in gothic style between the years 1442-1448. The székely people were revered the Holy Virgin even in the XV century and on her festivities they gathered around Somlyó. The statue of the Virgin was made by an unknown artist at the beginning of the XVI century out of linden. It is the highest of these type of statues on the world, its total height is 2.27 m. It represents the Woman Dressed in Sun, with the moon under her feet and the girdle of 12 stars around her head. It remained unharmed during the great fire in 1661.

The legend says that one of the leaders of the tartars wanted to kidnap it thinking that it´s very prescious, but it was so heavy, that they couldn´t move it even with eight oxen. In his anger the commander bruised the face and the neck of the statue with his sword. These scars are still visible today. The saint´s day at Pentecost and pilgrimage to Csiksomlyó became a feast for the whole Hungarian nation, which represents our common past, common present and hopefully our togetherness in the future.
FaLang translation system by Faboba

We have 4 guests and no members online